Cane vs. Beet Sugar: A Difference?

Granulated white sugar, the favorite and most widely available sweetener, is extracted from sugar cane and sugar beet plants. We call it simply "sugar" or table sugar, no matter where it comes from, and most of us cannot distinguish one from the other.

However, it turns out some consumers argue they have a different aroma, caramelization, and baking performance. In this blog post, we explore what could be responsible for those differences. Also, when it comes to culinary performance, is cane sugar better or worse than beet sugar?

Impurities: Some Say "Tiny But Meaningful"

Table sugar is considered one of the purest food products. Chemically speaking, it is an astonishing 99.95 percent pure sucrose, regardless of whether it is made from cane or beet. The remaining 0.05 percent is mostly water plus what is called impurities.

Impurities are undetectable by the vast majority of consumers because they are present in minuscule amounts. However, the presence of those substances is the only possible explanation as to why some people claim they can detect the source of their table sugar and that beet sugar has different culinary performance than cane sugar.

Impurities include anything other than sucrose and result from: (1) the raw material, and (2) the process used to produce each sugar. The composition of impurities in cane sugar is not the same as in beet sugar. Learn why next.

What Are The Differences?

The composition of impurities in cane sugar is not the same as in beet sugar for two reasons:

The slight difference in composition between cane and beet sugars results from the fact that different chemical components are present in each plant. The raw material for cane sugar is the whole stem of the cane, which grows above ground. On the other hand, the raw material for beet sugar is the entire root of the plant and so, grows underground. Other dissimilarities between cane and beet plants are listed below. 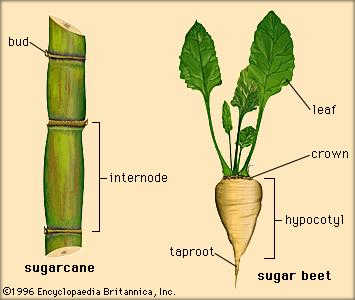 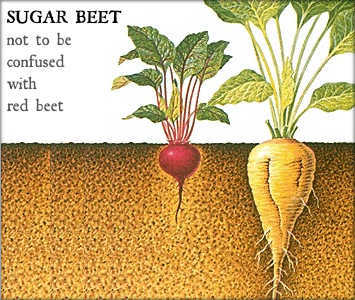 Note that the terms sugar cane and sugar beet are made up of two words. To simplify, I connect the words and use sugarcane and sugarbeet or I simply use cane and beet.

2) The Process Used to Make Sugar

Another reason why cane and beet sugars are not exactly the same is a result of the process used to produce each one. The differences in composition between the crops require different refining methods and chemicals.

The processes and the chemicals used to refine cane and beet sugars are not the same because their starting material — cane or beet juices — have a different composition.

Two substances are present in the cane and beet juices and must be separated: sugar (sucrose) and nonsugars. Nonsugars – referred to as "impurities" – include all dissolved substances except sucrose. Impurities are unwanted and have to be removed as they interfere with the sweet taste and decompose into less palatable chemicals during the concentration process of the juice. Impurities may be glucose, fructose, proteins, complex carbohydrates, coloring substances, and minerals.

Beet and cane juices have similar sugar content but dissimilar amounts of impurities. The beet juice contains about 2.5 percent impurities and the cane juice approximately 5 percent.

The refining process results in white sugar (99.95 percent sucrose) going out as the final product and nonsugars (impurities) accumulating in thick dark syrups, aka molasses. Most impurities are removed during centrifuging, but a minuscule amount — about 0.02 percent — remains around the sucrose crystals. And these tiny impurities are responsible for the argument that cane and beet sugars do not have the same aroma, caramelization, and baking performance.

Refined sugar from beet and cane may be used interchangeably for all purposes. I list below some facts about them, to be able to draw a comparison:

Is it Cane Sugar? Beet Sugar? A Blend?

The familiar table sugar might be produced from sugar beet in a Sugar Factory or from raw sugar in a Sugar Refinery. Have you ever noticed that sugar producers usually don't state if their sugar is from sugarcane or sugarbeet? The reasons for that are listed below:

Typically, if the label of a white sugar does not identify if it is from cane or beet (as in most store brands), the product is from beet or a blend. For those brands, portions of each in any given serving vary over time based on price from the producers so that it can be cane one time, but beet another, or both cane and beet mixed. If a brand is always cane, it will often be labeled as such. Keep reading to find out why they are blended. The image below shows some common brand names of cane sugar, beet sugars, and blends.

Why Are Cane & Beet Sugars Blended?

Blends of cane and beet sugars are common because many sugar producers do not sell their products directly to consumers. They have their products sold and distributed by sugar marketing organizations, which may blend beet and cane sugar, based on price and availability. The top marketers in the country include:

The United States sugar production is shared between sugar cane (42%) and sugar beets (58%).

In 2018–19, the U.S. produced about 8 million tons of sugar annually, ranking in sixth in global production surpassed by Brazil, India, European Union, Thailand, and China. It also imports almost 3 million tons. American sugar producers and processors receive a variety of government supports. An overview of the sugar industry in the United States is as follows:

The United States is one of the only countries in the world that grows both cane and beet plants. Currently, only genetically modified varieties of sugar beets are planted. Read the statement of an American coop of 850 beet growers explaining why they support GMO technology here.

Most sugar cane is non-GMO. Up until recently, it was one crop that had not been genetically modified. However, since 2017, Brazil has been growing GM cane. Brazil is one of the top cane sugar producers and exporter of crude raw sugar in the world. The United States is the second top importer of crude raw sugar, which is used to produce refined sugars.

Be aware that sugar itself is GMO-free. Once sugar is refined, it no longer has any traces of GMOs in it. Sucrose molecule is identical whether it comes from GMO plants or not.

Cost of Cane vs Beet Sugars

The price of cane sugar we pay in stores is similar to that of beet sugar. In January of 2020, the average cost of white refined sugar (granulated, fine granulated, and extra fine granulated) I paid in stores across the city of Richmond, Virginia was 75 cents per pound. It varied from 28 cents to $1.30 a pound.

I also bought two imported refined beet sugars and paid about $4 per pound. According to the label in the back of the package of NOW non-GMO Beet Sugar and NOW Organic Beet Sugar, they are imported from Austria. Europe is the world's leading beet sugar producer. It grows only non-GMO sugar beets but no sugar cane is planted there. Also, sugars made from GM cane and GM beet cannot be sold in Europe.

Learn more on a previous >>> What is Granulated Sugar?

The term 'sugar' can cause confusion as it has many definitions, so read this >>> What Is Sugar?

Read more on how refined sugar is produced here >>> What is Refined Sugar?

What did I miss?

What would you add?

What exactly is a "natural" sweetener? It's not what you might think.

Guide to Granulated Sugar: The Favorite and Most Versatile Sweetener of All

A Complete Guide to Brown Sugars—from Unrefined to Raw and Refined.